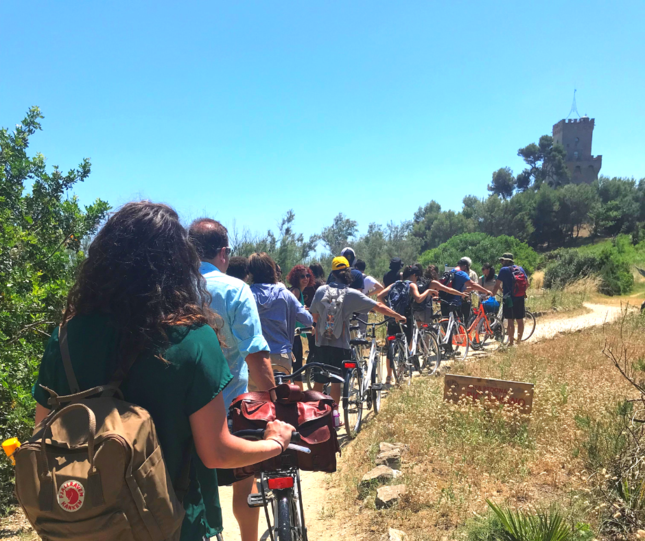 In the framework of a cooperation between IUCN Med and the George Washington University International Institute for Tourism Studies, a cohort of international tourism masters students had the chance to meet with local students in Abruzzo region as a part of an on-site practicum, applying methodologies developed by MEET Network and DestiMED Project.

Included in the programme was a visit to Torre del Cerrano to learn about their efforts during DestiMED Project and an overall tourism development plan with recommendations developed for Abruzzo region to follow the model developed by MEET in several of the other iconic parks there.
Fred Baldassaro, one of the participating students from George Washington University in Washington, D.C., who recently completed a student consulting project alongside IUCN and the University D'Annunzio to improve and enhance tourism in the Abruzzo region of Italy has shared with us some impressions of his visit to Torre del Cerrano.

The smell of the pine needles mixing with the salty breezes blowing in from the Adriatic Sea. That is what I think of when visiting Torre del Cerrano, the protected marine area on the southeastern shore of Italy. Our guide has taken us on a bike ride under the lush canopy of pine trees that are growing up through the sand and brush just a few steps away from the beach. I had been to Italy many times, but never experienced such a wide open, expanse of coast line mixed in with history.

The Torre Cerrano is one of the ancient coastal towers of the Kingdom of Naples, located on the Adriatic coast, in the province of Teramo, between the seaside towns of Silvi and Pineto. It is one of the few remaining examples of the dense network of coastal fortifications of the Kingdom of Naples, which had the function of repelling the frequent attacks of Turks and Saracens from the sea a long time ago.

There are no invaders today, unless you count me and my bike riding friends who are pedaling for about a mile or so to reach the old tower to get a glimpse of the beach and water from above.

This is all made possible because of the work of DestiMED and the MEET Network. In 2017, the DestiMED team picked the Torre del Cerrano Marine Protected Area as a place to design ecotourism packages and help maintain and measure sustainability of tourism in the park as well as develop guidelines for sustainable tourism.

The results of DestiMED’s work in the area has been a success. The mayor of Pineto, Robert Verrocchio,  told me the work that has been done to create itineraries and preserve the area was originally met with skepticism from business owners who feared less development would keep tourists away, but the results are the opposite. Tourism in Pineto is up and people are enjoying the beach. That anecdotal evidence also is backed up by the high ratings tourists give Torre del Cerrano on Trip Advisor, with over 400 reviews averaging 4.5 out of five stars.

Torre del Cerrano is establishing itself as not only a place for people to get away and relax under the sun, but an important reminder of what great things can happen when responsible tourism and a love of nature can come together.

All news
Back to top